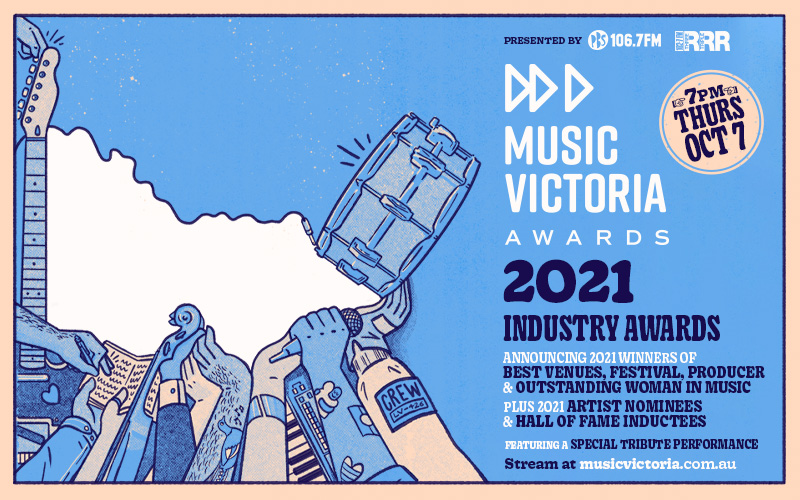 Music Victoria is excited to present the winners of tonight’s Industry Awards and unveil the 2021 Hall Of Fame inductees.

The second ever live-streamed Industry Awards event was broadcast live on Channel 31 and the web earlier tonight to award the industry-voted winners for Victoria’s best producers, venues, festivals and women in music, and reveal the shortlisted nominees for all remaining categories to be presented at the 2021 Music Victoria Awards in December.

Tonight’s debut Industry Awards hosts, Emma Peel (PBS 106.7FM) and Daniel James (3RRR 102.7FM) were thrilled to announce the 2021 Music Victoria Awards Hall Of Fame inductees, Kylie Minogue and Pierre Baroni. The internationally acclaimed pop megastar and the late great legend of the Melbourne airwaves will respectively be inducted into the Music Victoria Hall Of Fame at the official Music Victoria Awards ceremony taking place Thursday 9 December at the Melbourne Recital Centre. Melbourne artist, June Jones paid tribute to Kylie by covering her hit song ‘Come Into My World’ live for those lucky enough to have tuned in last night, while PBS 106.7FM Program Manager, Owen McKern praised Pierre on behalf of the station for his posthumous induction.

“PBS is truly thrilled to learn that Pierre Baroni will be inducted into the Music Victoria Awards Hall of Fame. An extraordinary broadcaster, Pierre programmed and presented Soulgroove’66 on PBS from 2003 until his death from cancer in March 2021. Pierre had been broadcasting on PBS since 1997 and his shows became unmissable weekly content for those discovering soul music and classic rhythm and blues. Beyond PBS, Pierre had been a musician, a producer, a photographer and a long-time artist and designer for the Mushroom Group. For all of us here at PBS he was a friend, a cherished colleague and a revered music collector. We still miss him dearly but are delighted that his memory and his legacy will live on through his place in the Music Victoria Awards Hall of Fame.” – Owen McKern, PBS 106.7FM Program Manager

Music Victoria would like to congratulate tonight’s winners of the 2021 Industry Awards. First up, is this year’s Outstanding Woman In Music recipient, Charlotte Abroms who will receive $3,500 cash courtesy of City Of Melbourne. Charlotte is an acclaimed artist manager, APRA/Songhubs board member, and highly sought after mentor and industry panelist. She is an ongoing collaborator with Victorian youth program The Push and is regularly invited to speak at major music institutions and festivals such as Collarts, RMIT, JMC, RaRa Records, Girls Rock!, YWIM, Women in Music, AIR and BIGSOUND. In 2020, Charlotte raised over $50K for Support Act through her Facebook fundraiser and assisted in the early days of livestreamed festival, Isol-Aid to get the platform online, using her extensive contacts in the digital agency world. A previous winner of the Lighthouse Award (2017), Fast Track Fellowship (2018), and Angie McMahon’s 2019 SXSW Grulke Prize, Charlotte can now add 2021 Outstanding Woman In Music to her extensive list of music industry accolades.