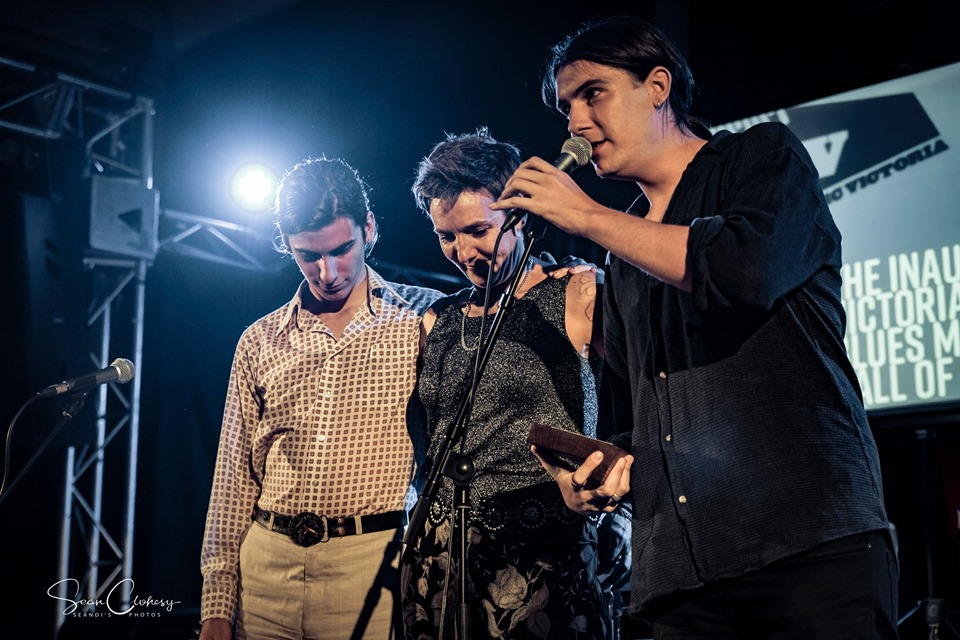 ‘Blues is easy to play, but hard to feel.’
In the famous quote, Jimi Hendrix recognised the power of the blues is in how you deliver it, and blues in Victoria has harboured many masters of the art. It is time for respect and recognition!

And so, at an emotional celebration on 30th October, Australian blues music legends, Dutch Tilders and Chris Wilson were inducted into the inaugural Blues Music Victoria (BMV) Hall of Fame. The first Blues Music Hall of Fame in the Southern Hemisphere.

The MEMO music hall in St Kilda was packed to capacity when members of Dutch’s band, The Blues Club accepted the award on behalf of the Tilders family and his enduring fans.
Geoff Achison (Guitar), Barry Hills (Bass) and Winston Galea (Drums) remembered the early days at the Windsor Castle and Station Hotel, and how Melbourne blues lovers hung on his every word, and in awe with his driving fingerstyle acoustic blues. BMV ambassador, musician Lloyd Spiegel, introduced the Blues Club with his own memories of sitting at the feet of the master as a young guitar prodigy.

Blues chanteuse Kerri Simpson inducted Chris Wilson, voted the 2019 People’s Choice, with an impassioned tour de force of the great man’s musical exploits. The late musician was remembered for his powerful singing and harmonica performances, as well as his song writing ability in the country and blues field. Wilson’s wife Sarah, and sons Fenn and George accepted the award appreciating the enduring recognition.
Celebrations were complete with the Blues Club and BMV ambassadors Spiegel and Kelly Auty performing rousing performances from the blues canon.
BMV President Barry Maxwell said plans were well underway for the 2020 Victorian blues Hall of Fame and is eagerly awaited by the blues community.